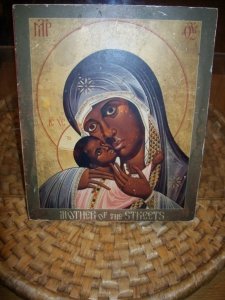 “Special Communion is a blogging collective committed to promoting the liberation of all beings through the raising of heaven and the destruction of empire.”

The name of the blog comes from a tight-knit and amazing group gathering that several folks formed at Union Theological Seminary in 2006 in order to not be eaten alive by the ridiculous politics of the supposedly “liberal” seminary and to act as protective space against the white-guys-who-have-a-lot-of-feelings who tend to derail or monopolize every single public conversation in grad school.  (For an informative look at the classroom dynamics of our “progressive” seminary and “progressive” graduate schools, please see Derailing for Dummies.) This group prayed, laughed, ranted, exorcised demons, performed healings, prayed some more, and drank a considerable amount of unconsecrated wine (hence the name “special” communion!).

The inspiration for this blog came from noticing serious rises in attention paid to blog writing by men in both right-wing “orthodox” camps and in the “emergent” church world. While some of the concerns raised by these bloggers are relevant (church music sucking, irrelevance of church messages, the increased privitization of faith, concerns about the Prosperity gospel preachers, etc.), they shared common characteristics: tokenization of people(s) of color, speaking about – but never with – the poor, near-total inattention to issues that affect women, queers and gender non-conforming folks, marginalization of sexual life and a shutting down of any discussion of sex work that doesn’t involve making sex workers “perfect victims”, ignorance of systemic racism, pathologization of physical resistance (i.e. all “real” activism looks like upper-middle-class white cis boys going to jail for their pretty little non-violent SOA protest), lack of concern about sexual violence, a refusal to directly point to the police state as a direct cause of harm to people of color and poor people, and only glancing mention of the ways that oppressions link and intersect. This blog means to serve as one place where these issues can be raised and talked about by empire-critical Christians committed to the Reign of God on earth and to demolishing the empire.